The entire EU public debt is steadily falling. Denmark’s finances in particular are improving, which is also reflected in the Danish municipalities. This shows new figures from Statistics Denmark.

The statistics show, among other things, that there are marked differences in the EMU debt of the various euro area countries. Estonia is at the top with only 9.5% of GDP debt, while Greece is the country with the largest public debt of 179% of GDP.

EMU debt includes a consolidated statement of significant debt items in government, municipalities and regions. In other words, the country’s public debt.

The EU countries have a total average debt of 83.5% of GDP, which has been declining since 2014 by about 3 percentage points after several years of increase.

Denmark has one of the absolute lowest rates in Europe in terms of EMU debt. The debt is 37.7% of GDP, equivalent to DKK 779bn. This makes Denmark a model example compared to crisis-hit countries like Portugal, which have a debt of 130.4% of GDP, Italy with a debt of 132.6% GDP and Greece, whose EMU debt is 179% of GDP .

Denmark is thus in sixth place in relation to the lowest debt in Europe and is thus surpassed only by Estonia, Luxembourg, Bulgaria, the Czech Republic and Romania. All the above countries, Denmark included, are thus within the 60% criterion, which is stated in the Stability and Growth Pact.

According to the Stability and Growth Pact, the normal gross debt limit is 60% of GDP in normal circumstances. This means that a country must have a maximum debt of 60% of its total GDP. There are only 12 euro countries that meet this requirement. These countries are marked in green in the map. 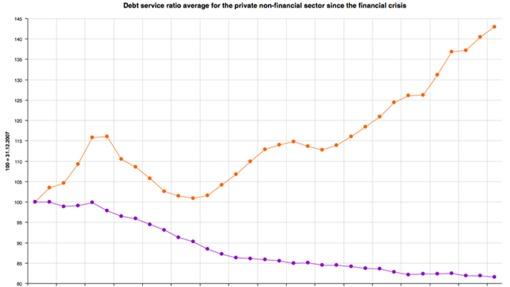 Estonia as a pattern example

Estonia is the euro country that performs best at present. With an EMU debt of 9.5% of their GDP, Estonia is the eurozone with the least public debt. They thus remain well below the EU’s 60% criterion. This point, however, is not the only point where Estonia is shining – in many other respects, the country is the EU cloth.

In addition to the above, Estonia also fulfills another important criterion on the annual government deficit. The annual government deficit should not exceed -3% of the country’s total GDP. The deficit for Estonia was in 2016 at 0.3% of GDP, when compared to -0.9% in Denmark. Only two countries failed to meet the above criterion. Spain, respectively, with -4.5% and France with -3.4%.

The fact that Estonia does so well may be due to a number of factors. One of the reasons for this is that the country has a much smaller economy than, for example, Denmark. With a total GDP of 23.14 billion. USD, the GDP of Estonia is 13 times less than that of Denmark, which is DKK 306.1 billion. dollars.

Looking at the country’s public revenue and expenditure, it is clear that Estonia has more expenses than revenue. One could wonder about the low EMU debt, but since this is a gross debt concept, only the liabilities are taken into account. Thus, the difference between assets and liabilities is not measured. Therefore, only expenses such as debt obligations and not investments are included, which can be part of the explanation for Estonia’s low debt.

Now we have looked at how the economic situation looks at EU level, but how does the financial landscape in Denmark look? We get answers to this in the map below, which shows the long-term debt of the Danish municipalities per inhabitant.

Each year, all municipalities are allocated an amount from the Ministry of the Interior, which is budgeted for fixed costs and financing of projects. If this amount is not enough, the municipalities have the opportunity to borrow.

How do the accounts look out in Denmark’s municipalities?

As seen in the above example, the debt fluctuates greatly among the municipalities. Mostly, however, most municipal debt lies between DKK 10,000 and DKK 20,000 per capita. inhabitant.

The size of the long-term debt and development is something that is well-kept in the Ministry of Finance, as this helps to ensure a healthy municipal economy. The overall goal is not to be debt-free, as it is necessary for the municipalities to invest in order to ensure future development. The municipalities, on the other hand, have the goal of reducing the debt and, at the same time, giving room for the possibility of development in the municipality.